The Bunda-La is an ex-pilot boat which was used along the Queensland coast.  It was built on the Brisbane River in 1958 and had almost 25 years of working life until 1982 when it was then sold into private ownership.

The Bunda-La was purchased in 1985 by Vic and June Venn and was used as a fishing boat.  It was donated to the Village in January 2011 by Vic and June and since that time, Horrie Hunt and his dedicated team, have been spending many hours working on the restoration.  When completed it will become part of the Maritime Museum.

Further information on this vessel can be found on the Australian Register of Historic Vessels website.

The Village has successfully applied for grants to help fund the restoration process. We would like to thank the generosity of:

All donations are most welcome. Anyone wishing to donate much-needed funds, please make contact with the Village or the Secretary of the Historical Society.

Spirit of the Outback

The Village successfully tendered to purchase the 1955 Spirit of Outback Club Diner Car from Queensland Rail with grant approved on the 31 March 2016.

The train carriage provided great excitement at the Village on the day of its arrival. It was quite amazing to see the precision of the vehicle that transported the carriage from Ipswich, a journey that took more than two hours.

Almost "inch by inch" it made its way reversing in through the "bottom" gate near the AMRSQ buildings, and slowly backed its way into the Village and waited while another heavy lifting machine arrived to "cradle" the carriage off the transport onto the new rails at its new home.
No damage was done to trees or buildings. A credit to all teams. The carriage is in place beside the smaller train track.

Work on the Spirit of Outback Club Diner Car is still progressing in a staged process. Once the modifications completed, it will come alive as an innovative feature in the Village, with events such as Murder Mystery Evenings and Murder on the Orient Express style events, and much more.
When the roof was fitted to the super structure, stage four became complete. Behind the scenes, many hours of spray painting eighty roof purlins took place before installation of the roof.

As part of stage five the following took place:

This project was supported by Work for the Dole, a Federal Government Program, via TURSA Employment & Training and Moreton Bay Regional and Councillor Adam Hain. 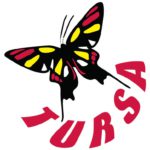 We would like to particularly thank Robert L Roser Painting Contractors Pty Ltd, a local Caboolture company,  for their professional help and generosity in preparing and painting the structural framework and carriage to the high standard required, making this one of the best new exciting pieces of Queensland Rail history anywhere.